During our big trip up north last month we saw lots of kokeshis, but I'm not sure we were really having complete kokeshi adventures. However, on our way back down south along the Japan Sea we finally had a really good one. 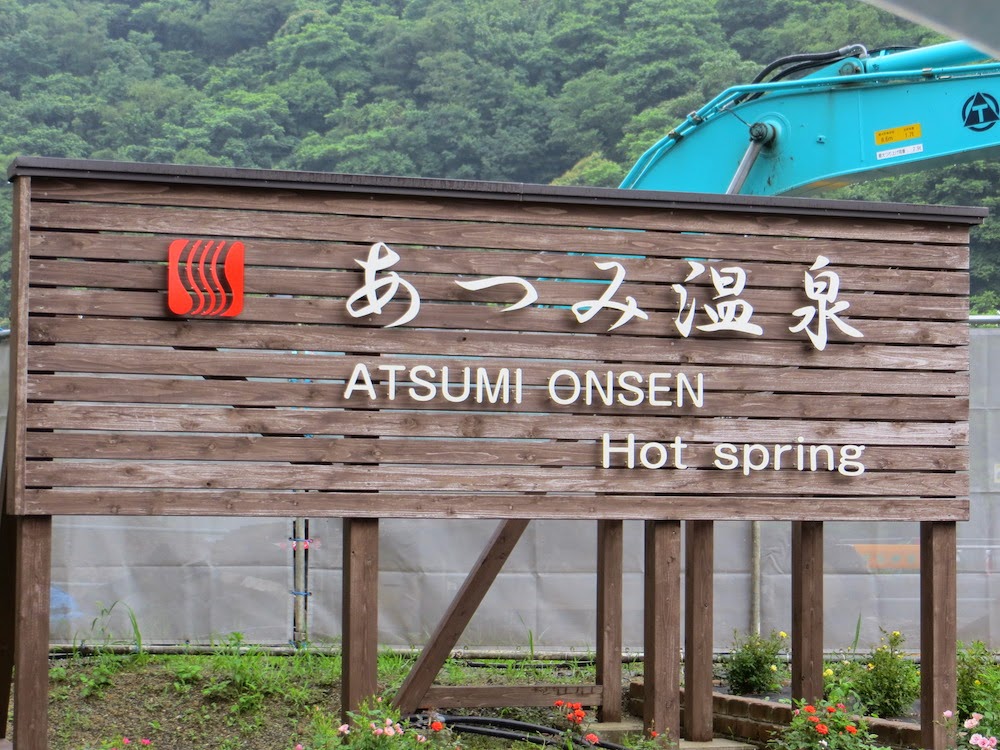 Our destination was Atsumi Onsen 温海温泉 in southwestern Yamagata Prefecture near the border with Niigata Prefecture. Atsumi, you see, is the home of one of Naoko's favorite kokeshi makers, Mr. Abe Shin'ya 阿部進矢さん, but because Atsumi is relatively isolated and somewhat difficut to get to we've never been able to visit his shop. On top of that Naoko is not the only enthusiast who like's Mr. Abe's wide-eyed, heavy-set designs, so his kokeshis are quite hard to come by. Therefore, this was a necessary trip to make.
We found Atsumi pretty easily, but it was surprisingly tough to find Mr. Abe's shop. We first stopped at the train station where there's usually tourist information available, but they didn't have any brochures and the station attendant had no idea Mr. Abe was. On top of that we knew that there were two large Abe kokeshis on the Atsumi station platform, but when we went out to see them they weren't there. According to the station clerk the giant kokeshis had deteriorated so badly that they had to be thrown away. Too bad! But we were in the right town, so we headed up into the mountains where the onsen is located. 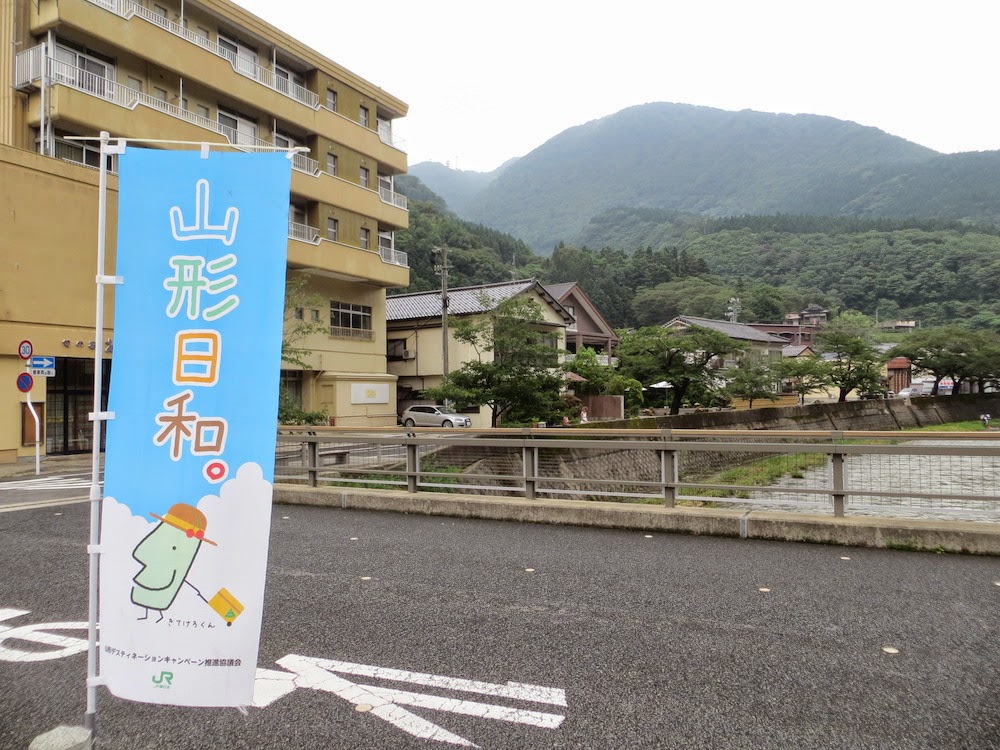 Atsumi is in a deep green valley and is really very pretty. There are lots of old inns clustered beside a large river, so it feels just like a nice old onsen town (which is indeed the case -- people have been going there for more than a thousand years). Although our plan was to stop for a couple of hours and then get back on the road to Tokyo, after having lunch at a delightful little coffee shop we decided to find a room and stay for the night. After all, we had the beautiful mountains and river, hot springs, and also the ocean and beach just down the road. What a great place to spend some time relaxing at the tail end of our vacation.
Of course our primary goal was to visit Mr. Abe's kokeshi shop, and we finally discovered its whereabouts through the Atsumi tourist office. We were close, and after parking at a public parking area we walked around the corner, down a side street and there it was! 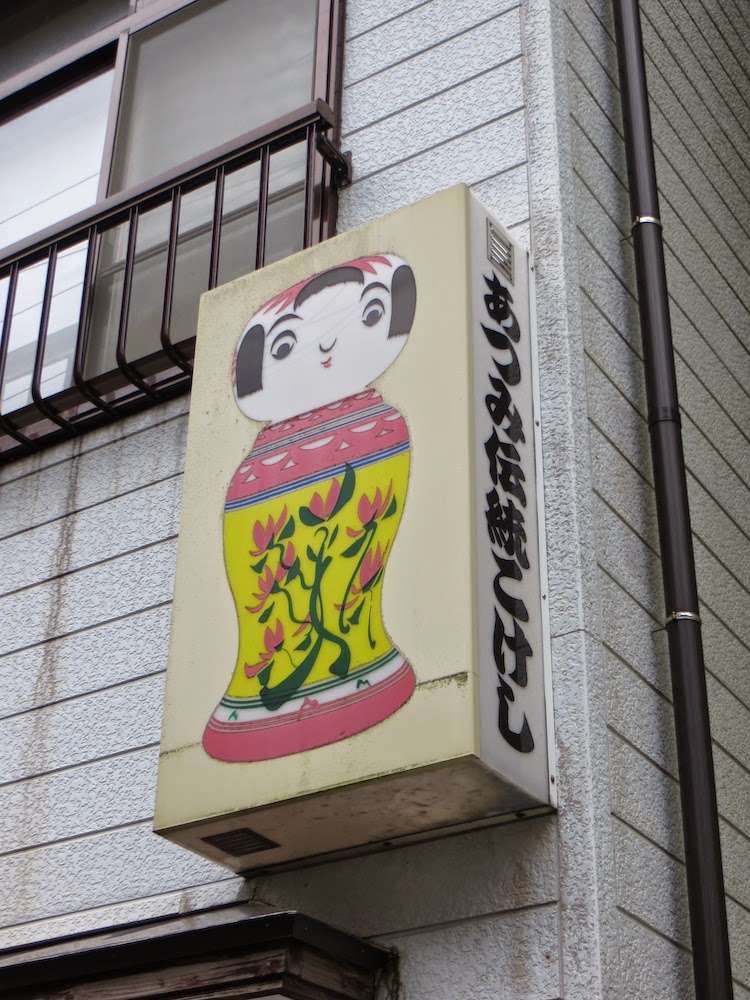 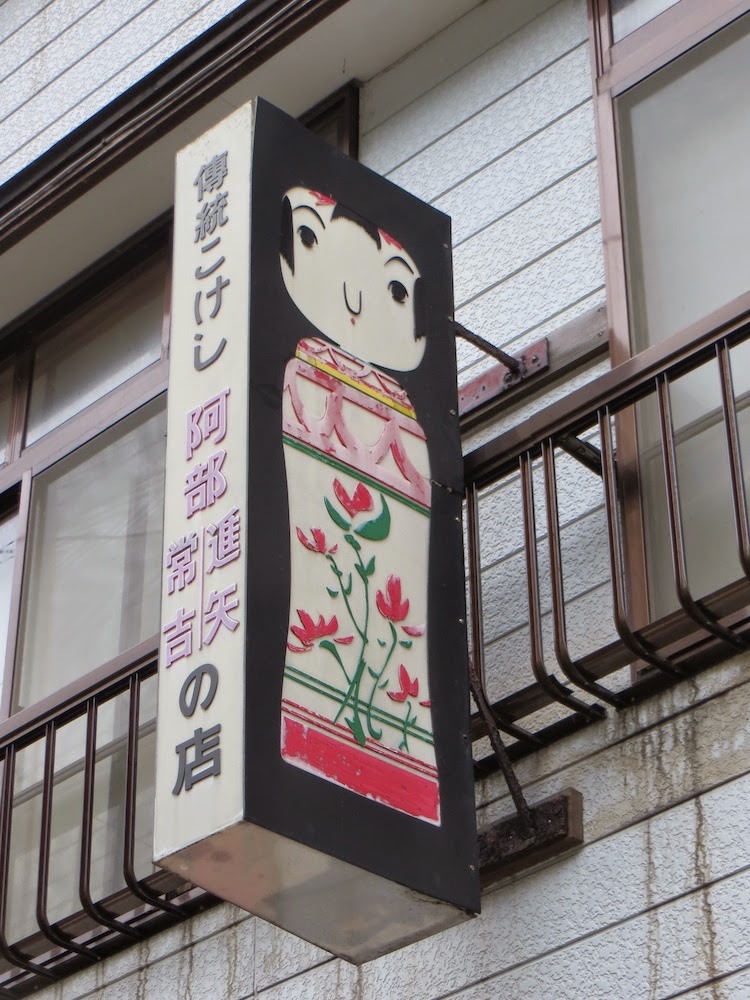 Mr. Abe wasn't there at first, but after a few minutes he drove up. He and Mrs. Abe then welcomed us into their living room and, as is the tradition, we were fed some local foods. Naoko is such a big fan of Mr. Abe that she had lots of questions, and of course was just happy to be in the very place where such wonderful kokeshis are created.
As it turned out -- and we kind of knew this already -- Mr. Abe is currently so swamped with demand for his kokeshis that he can only take orders. Also, one must keep in mind that he is 77 years old and probably could have retired years ago, but I think he feels obligated to his many fans that ceaselessly buy his kokeshis. Because of his popularity I would guess that with the ongoing kokeshi boom there's no end in sight for him. Fortunately Mr. Abe had a lot of kokeshis on display, many of which were recently made orders, and he said it was ok to photograph and show them on this blog. We had never seen so many new Abe kokeshis inn one place, so this was a real treat. 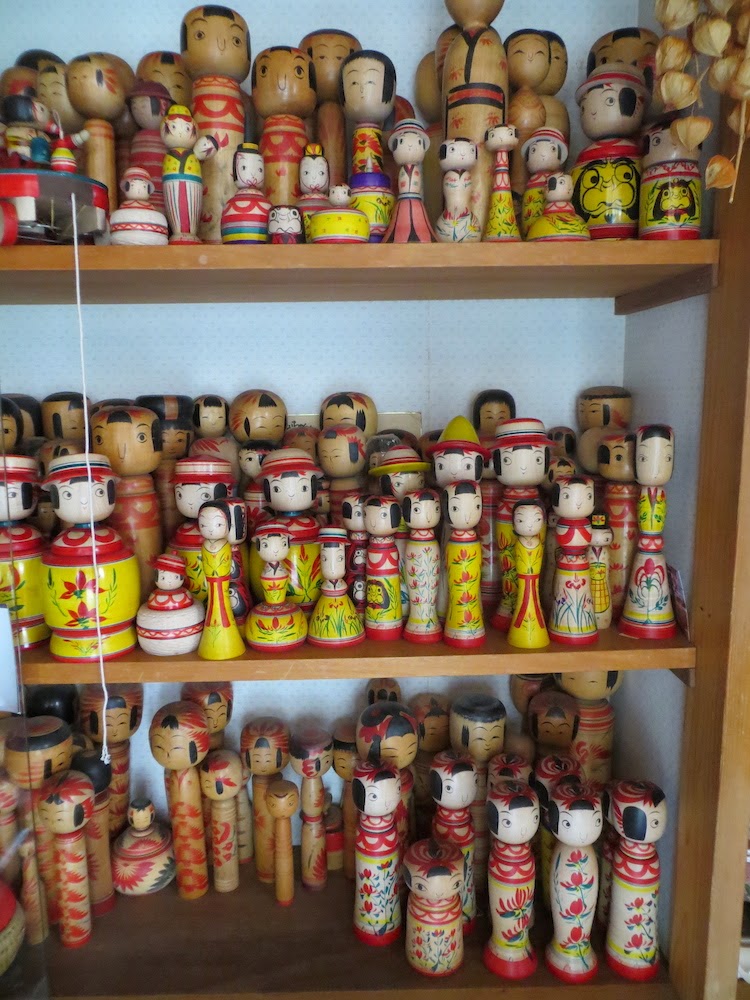 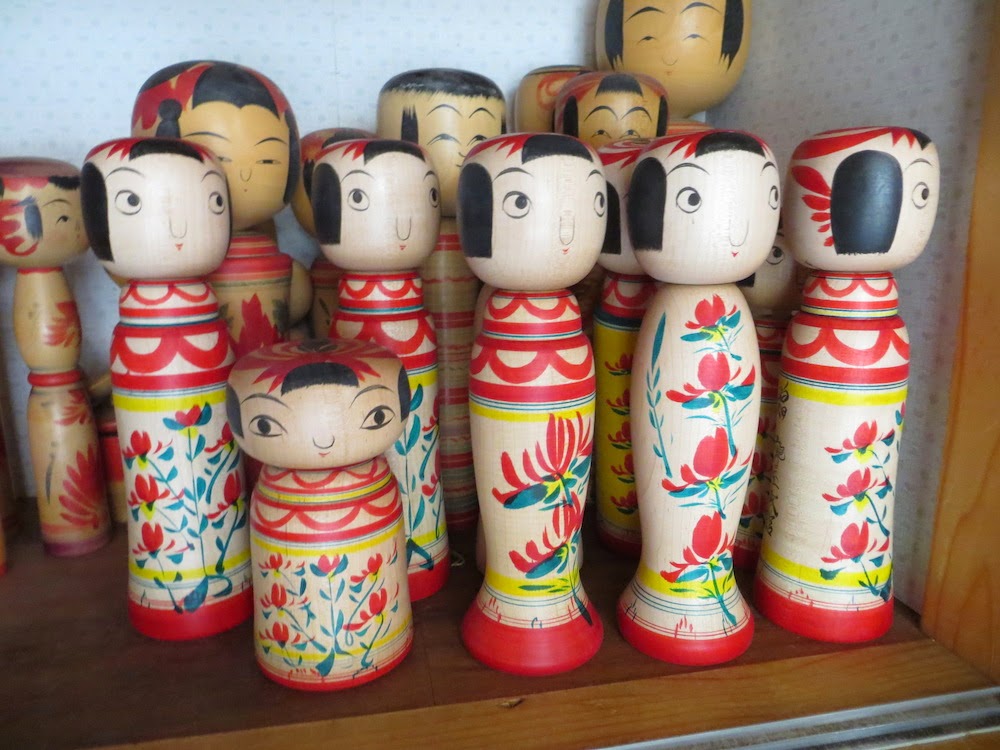 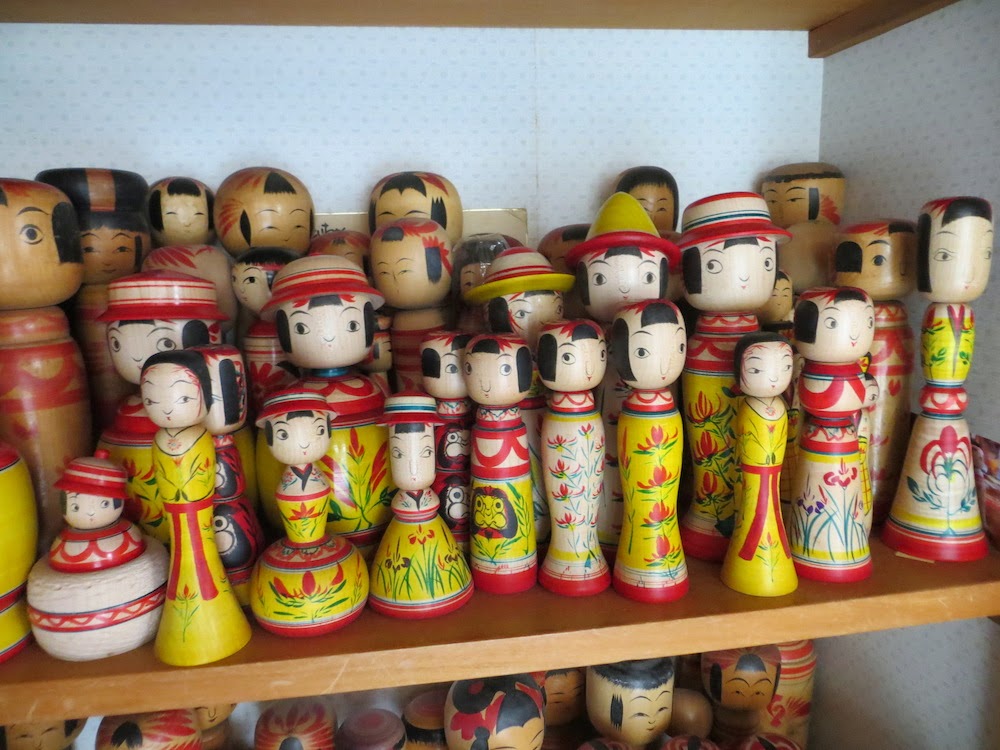 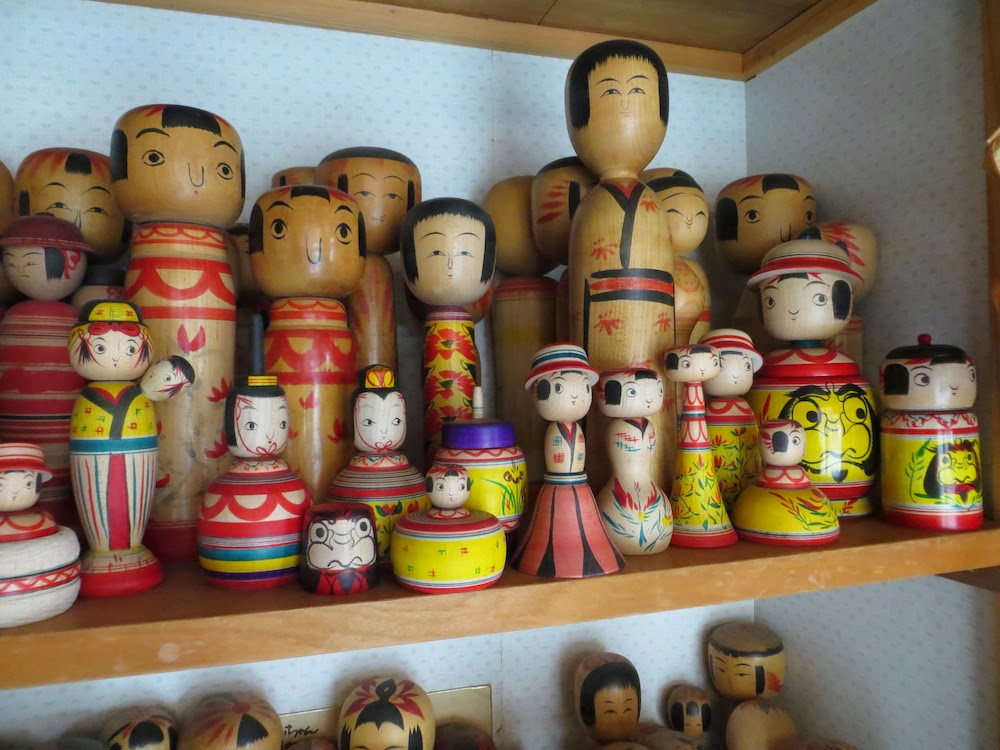 Naoko went through the catalogs with Mr. Abe and chose a few kokeshis. It will take a few months for them to be completed, so I'll show those on the blog after they arrive.
We had a really nice time with the Abes, but finally had to say goodbye and decided to head down toward the Japan Sea so Lena and Emily could climb on the rocks and splash in the water. But the kokeshi adventure wasn't quite over, as standing like a guardian at the entrance of Atsumi was a  giant Abe kokeshi staring out to sea. Here are a couple of views. 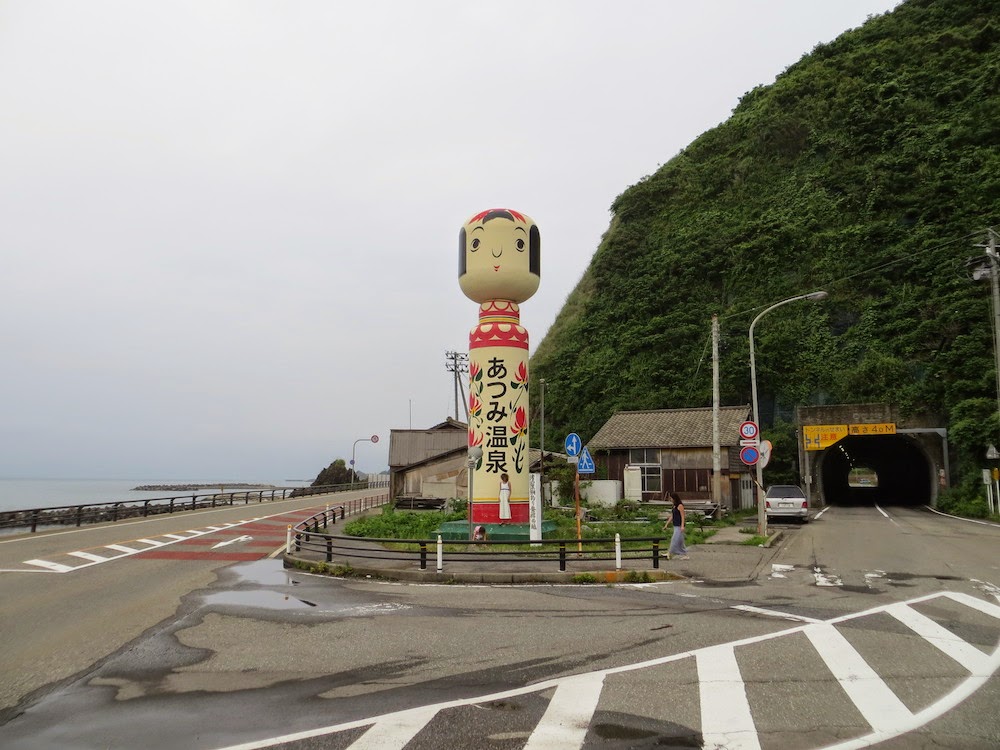 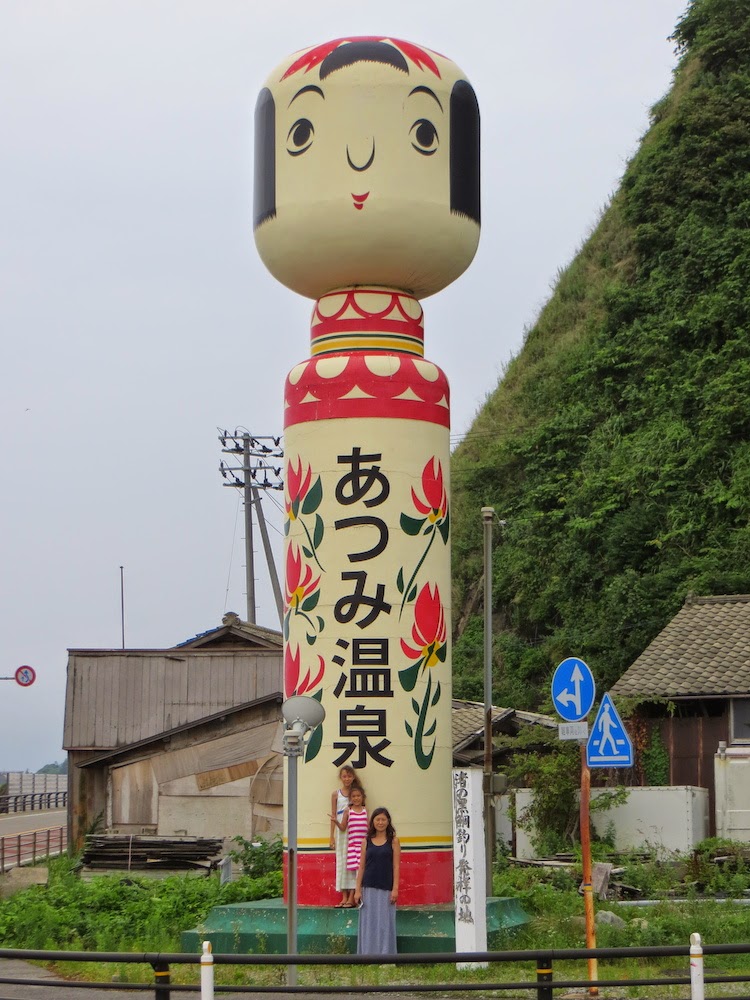 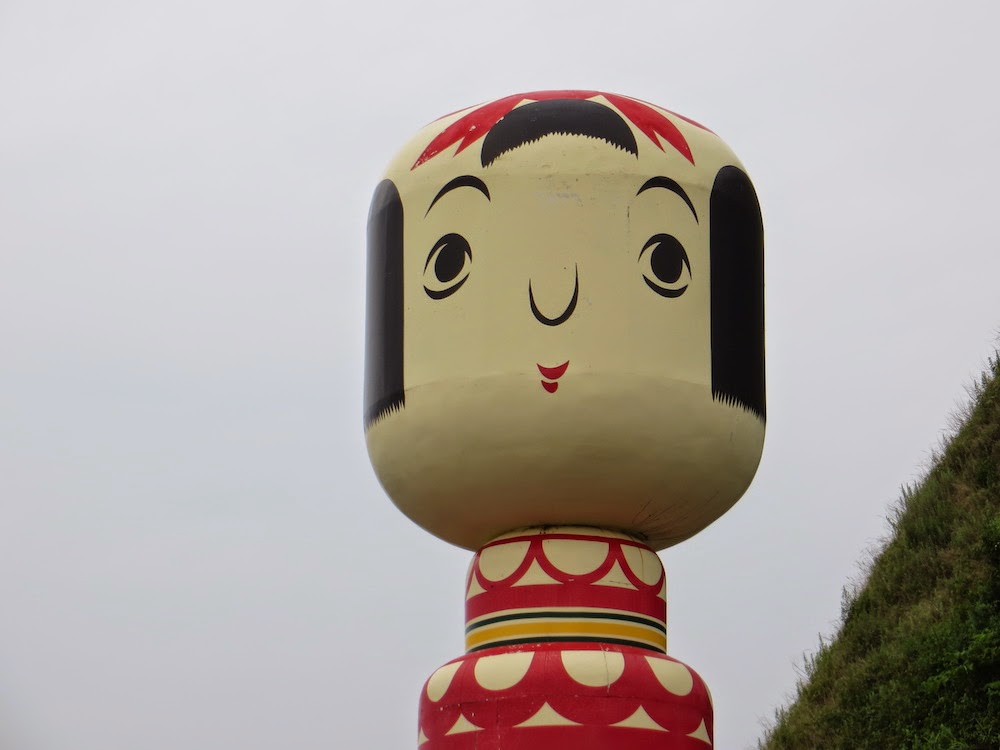 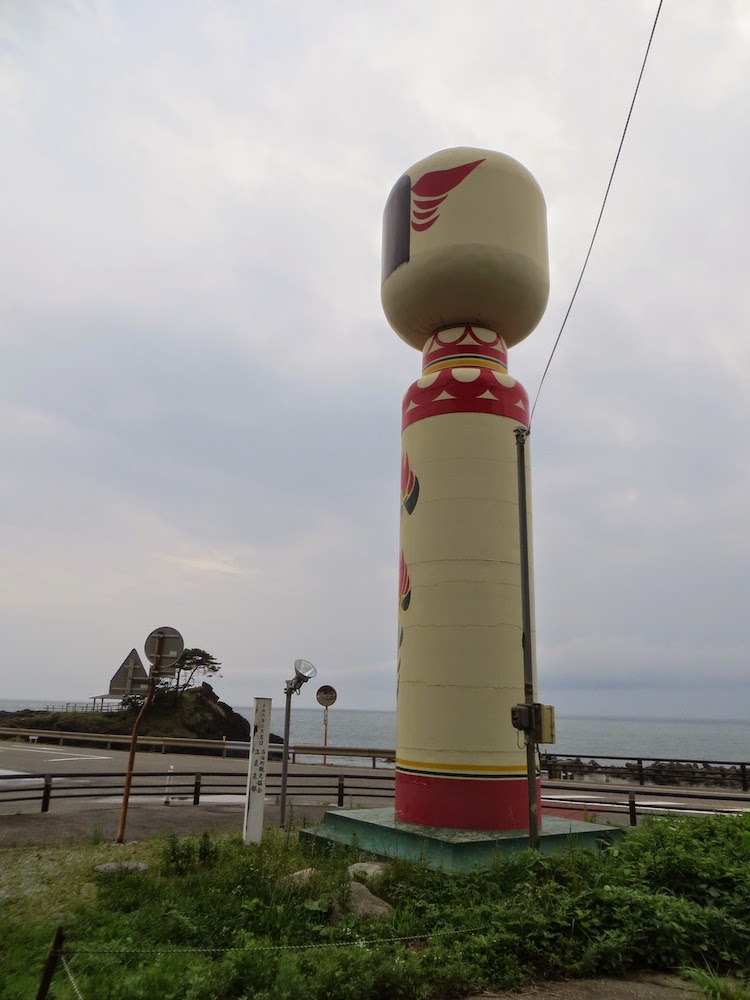 And so ended another kokeshi adventure to Tohoku. If you want to visit Mr. Abe it's probably easiest to drive, but taking the train is a viable option too. I would highly recommend staying in Atsumi for at least one night, but just be sure to call ahead of time and make sure that Mr. Abe will be in.
Posted by John at 5:43 PM